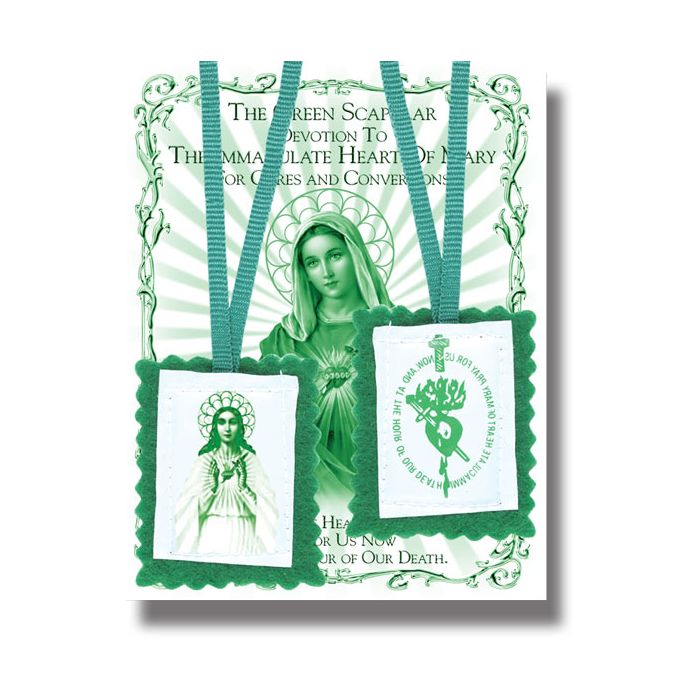 Item
41000
In stock
Be the first to review this product
$1.69
Add to Wish List Add to Compare
Gift Registry
Add
Description
The Scapular of Conversions and Cures

The Green Scapular, called by Our Lady, "The Badge of the Immaculate Heart of Mary," was given to the world by the Blessed Virgin Mary through a series of apparitions to Sister Justine Bisqueyburo, a Daughter of Charity, in the early 1840's in Paris, France. On the Feast of the Nativity of Mary, Sept. 8th, 1840, the Mother of God appeared holding in her right hand her Immaculate Heart, mounted by flames and holding in her other hand a scapular.

The scapular consisted of a simple piece of green cloth, rectangular in shape, hanging from a green string. On one side was an image of Our Lady dressed in a long white gown which reached to her bare feet. Over this she wore a light blue mantle. However, she wore no veil. Instead, her hair hung loosely about her; and in her hands she held her Heart from the top of which gushed abundant flames. Her bearing was enhanced by a majestic beauty all heavenly. On the other side of the scapular was pictured her Immaculate Heart, all ablaze and transparent as crystal, with rays pouring out that appeared more dazzling than the sun. This Heart, pierced with a sword, was encircled by an inscription in the form of an oval and topped by a golden Cross. The inscription read:
"Immaculate Heart of Mary, pray for us, now and at the hour of our death."

Investiture in this scapular is not required.

Reports of conversions and cures attributed to this scapular should be sent to the Daughters of Charity.