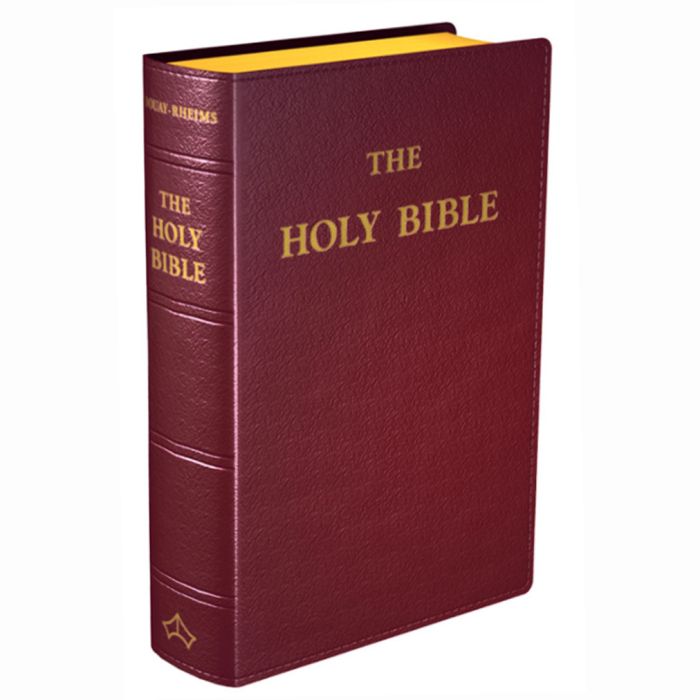 This edition brings together the very best of three Douay-Rheims Editions:
∗The Old and New Testaments - from the 1899 edition published by John Murphy Company, Baltimore, Maryland. Imprimatur: James Cardinal Gibbons, Archbishop of Baltimore.
∗The Old and New Testaments and Historical and Chronological Index have been beautifully re-typeset, faithfully to reproduce the original 1899 Gibbons edition. No one can fault the quality and authenticity of the Douay-Rheims Bible, but all previous editions have had to compromise on the quality of the text printing. Not so with this new edition, which takes advantage of the very latest in digital technology to ensure that throughout the Bible, the text is always crystal clear.
∗No more blotches or scratched out text, making you wonder what is being said. In fact, this is the first time ever that the Douay-Rheims has been digitally typeset! Both the Old and New Testaments and Historical and Chronological Index have been lovingly typeset line by line in the classic Century Expanded font, which was used in the 1899 original, thus faithfully reproducing the original edition.

Other Features Include:
--Engravings - These beautiful engravings recreate key moments in Biblical History. In this edition, all thirty-two engravings from the 1941 edition published by The Douay Bible House, New York, have been carefully remastered and enhanced. Imprimatur: Francis J. Spellman, D.D., Archbishop of New York.
--Maps - When creating this edition of the Holy Bible, modern maps were not considered suitable, and so an artist was commissioned to reproduce the eleven beautiful maps from the 1911 edition published by Wm. Aleiter Co., Catholic Supply House, Indianapolis. Imprimatur: John Cardinal Farley, Archbishop of New York.
--Included in this edition - Three Papal encyclicals regarding the importance of the Holy Bible!